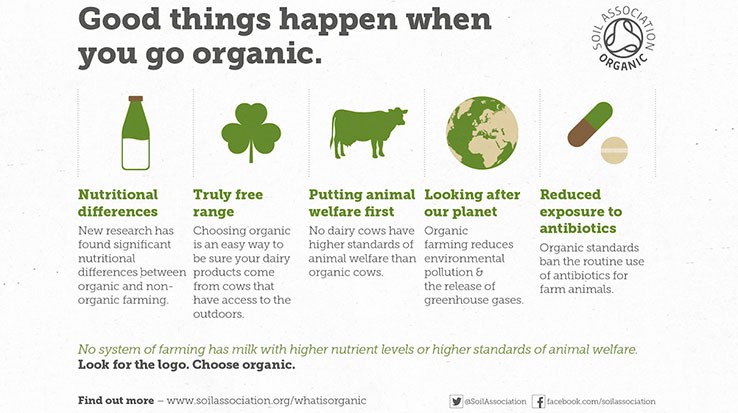 (Article by the Soil association - here).

The Soil Association has drawn attention to an important new study led by Newcastle University which was recently published (16 February 2016) in the British Journal of Nutrition. The team analysed data from around the world, reviewing 196 papers on milk and 67 on meat "and found clear differences between organic and conventional milk and meat, especially in terms of fatty acid composition, and the concentrations of certain essential minerals and antioxidants" (Newcastle University Site - here).

In their article, the Soil Association describes this significant study as involving "the largest systematic reviews of its kind" and providing clear evidence that:

Some of the Key findings cited in their article are outlined as follows:

* Organic milk and dairy contains 40% more conjugated linoleic acid (CLA) - CLA has been linked to a range of health benefits including reduced risk of cardiovascular disease, certain cancers and obesity, but evidence is mainly from animal studies

“This research confirms what many people have always thought was true -what you feed farm animals and how you treat them affects the quality of the food - whether it’s milk, cheese or a cut of meat. These scientists have shown that all the hard work organic farmers put into caring for their animals pays off in the quality of the food they produce - giving real value for money.

They suggest that the higher levels of Omega 3 is probably due to the difference in diet offered to organic cows:

"...organic animals have to eat a more natural grass-based diet containing high levels of clover. Clover is used in organic farming to fix nitrogen so that crops and grass grow (instead of manufactured/chemical fertilisers), and this research has found that clover also increases the Omega 3 concentrations in meat and milk. Under organic standards, organic cows must eat a 60% fresh grass based diet or hay/silage (conserved grass)."

This latest work builds on two previous published studies by the team at Newcastle University:

and an earlier study:

The results of this crop study are also discussed on the Newcastle University site here: "Investigating the Composition of Organic and Conventionally-grown Crops."

From their findings, they conclude:

"This previous study – also published in the British Journal of Nutrition – showed that organic crops and crop-based foods are up to 60% higher in a number of key antioxidants than conventionally-grown crops and contained less of the toxic metal cadmium."

“We have shown without doubt there are composition differences between organic and conventional food. Taken together, the three studies on crops, meat and milk suggest that a switch to organic fruit, vegetables, meat and dairy products would provide significantly higher amounts of dietary antioxidants and omega-3 fatty acids,” (Professor Leifert).

* This agricultural study was also published into a booklet and can be found on the Neal's yard Remedies site  - Click here / image for a link to this booklet: (July 2014)

In sum, for us at Nooma Organics, these combined studies confirm our conviction that not only will organic crops provide the best nourishment for our bodies, but equally offer the finest ingredients, with the greatest nutrients, for our artisan Skincare range!